Athletes of the Week

12/7/2018
“Athletes of the Week” (AOW) are selected based on athletic performance and sportsmanship. Positive sporting behaviour is valued at KES and integral to our Athletic Philosophy and School Mission Statement emphasizing gentleness and learning and dignity and respect.

Senior Girl: Miranda Watson’s performance in our first basketball game against Parkview was amazing. Miranda took on a leadership role and led our new and returning players with a positive and encouraging attitude. Miranda kept the team engaged and enthusiastic while playing a disciplined defensive game with 4 fouls going into the 4th quarter. Miranda played with intensity and composure, and made every player feel good about their contributions. Well done, Miranda!

Senior Boy: Nathan Carter displayed a strong work ethic and had a lot of ice time in our hockey games at Bishop’s College. Nathan played extremely well in all three zones of the ice and was a key contributor to our special teams. Although we came up a little short, the determination of Nathan and all the players was outstanding. Congratulations, Nathan!

For the Week of November 26th – December 2nd

Junior Boy: Lucas Tam - In the most recent Junior Boys’ basketball match up, Lucas led an impressive comeback and late game drama for the Junior Boys’ team at Horton. He scored 42 points with several 3 pointers. The team took on the “all Grade 9 team” and was trailing by 13 at the end of three quarters. Lucas led the ‘never give up effort’ that fell slightly short but had the gym jumping in the 63-62 loss. The team is off to a great start with their 90 pound scoring machine leading the way. Great job, Lucas!

Junior Girl:  Gala Holm - The Junior Girls’ Basketball team opened their season last weekend with their annual home tournament, and Gala Holm led the way in all three games. In the first game of the season and tournament, Gala scored 18 points and helped our girls overcome an 11 point, 4th quarter deficit to push the game to overtime. In our second game, Gala scored 15 points leading us to our first win of the season. Finally, she saved her best for last as she poured in 20 points in a tight 47-40 loss. While Gala’s skills were on display, what was most impressive was her composure and leadership which will no doubt be relied upon as the girls continue their season. Well done, Gala!

Senior Girl: Heavyn Beals had three breakout games during our Girl’s Prep Basketball team’s run to a tournament championship in Maine, showing she was the best three-point shooter in the tournament. In the first game vs Kents Hill School, Heavyn had 24 points, including 5 three pointers. The second game saw Heavyn play stellar defense, racking up several steals and deflections, while contributing 10 points in the game. In the championship game, Heavyn had a stellar shooting day, keeping her three-point percentage at the top of our team, and help lead the team in the championship game. Heavyn’s play and sportsmanship during the entire event was a great example of the culture of our team and our School.

Senior Boy: David McCurdy demonstrated unprecedented leadership skills as he helped coach both curling teams in a highly energized junior league bonspiel at the Windsor Curling Club. With David’s vast training knowledge of the game of curling, he was able to transfer these skills and help both teams reach goals and develop their skills throughout the tournament, leading both to win half of their 8 draws. David is an incredibly talented curler, but stays very humble and professional as a coach, allowing each student to reach their individual goals and objectives.

We want every child to find an activity he or she can pursue with passion. With three seasons of sports and over 25 different options to choose from, we are pretty sure your child will find a few to love. Download our Athletics Photojournal to discover more sports at KES. 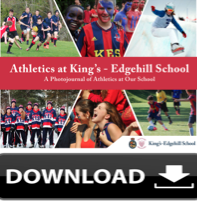 Back
1/1
KES inspires academic, athletic and artistic excellence with a commitment to the traditional community ideals of gentleness and learning, dignity and respect, so that students may discover and cultivate their unique potential, prepare for post-secondary education and develop a life-long enthusiasm for the spiritual and intellectual growth necessary to flourish in the contemporary world.